This Shark Week, help save sharks from cruelties like finning

There was a time when sharks were routinely portrayed by popular media as aggressive and ruthless predators—animals to be afraid of and to avoid, or even worse, to kill. But today, with growing awareness and increasingly positive public attitudes toward these magnificent creatures, we know that sharks themselves are in terrible danger from human actions, with their numbers in the wild declining sharply as a result of overfishing and cruel activities like shark finning. In fact, up to 73 million sharks are killed each year for their fins. 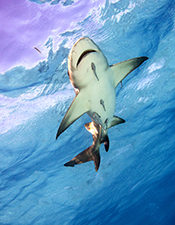 Shark Week, which began yesterday on the Discovery Channel, is evolving accordingly and now offers television viewers an opportunity to learn more about these awesome creatures who play an important role in the marine ecosystems and who could, unless the world takes critical steps, become extinct.

We have advocated for sharks for a long time here at the Humane Society Legislative Fund, the Humane Society of the United States, and Humane Society International. Shark finning is one of the most grisly and ecologically wasteful forms of animal cruelty there is, and the continuing market for shark fins in countries around the world is a priority target for our reform efforts.

Earlier this year, we worked with members of Congress to reintroduce the Shark Fin Sales Elimination Act, H.R. 737/S. 877, that would end U.S. participation in the global shark fin trade. The House bill is led by Reps. Gregorio Kilili Camacho Sablan, D-Northern Mariana Islands, and Michael McCaul, R-Texas, and it has 222 bipartisan cosponsors—more than half the House. The counterpart bill in the Senate is led by Sens. Cory Booker, D-N.J., and Shelley Moore Capito, R-W.Va.

We are putting our might behind passing this important bill, and last week, we hosted a briefing for the House of Representatives to draw members’ attention to the destructive transnational shark fin trade.

The featured guests were Brian and Sandy Stewart, producers of the documentary film Sharkwater Extinction. They treated a packed room of congressional staff to excerpts of their late son Rob Stewart’s award-winning film uncovering the ecologically damaging trade in shark fins, and met with lawmakers to discuss the urgent need to pass the Shark Fin Sales Elimination Act.

Stewart was a courageous filmmaker and fierce ocean advocate who tragically lost his life in a diving accident while filming two years ago. His work was invaluable to raising awareness of the shark fin trade, and helped change public sentiment toward sharks, turning many people worldwide into shark advocates. His parents are traveling the world, carrying on his mission through education and political action.

Rob’s work was also integral to getting his home country, Canada—the largest importer of shark fins outside Asia—to pass a landmark bill earlier this year that prohibits the trade in shark fins nationwide as well as finning in Canadian waters. HSI/Canada partnered with the Stewarts and other shark advocates to introduce and pass this bill.

The HSUS and HSI have also worked on ending the global demand for shark fins through public education and legislation elsewhere. HSI affiliates have won bans on shark finning in India, Taiwan, and the European Union, and its public awareness campaigns on reducing shark fin consumption in China, Taiwan and Hong Kong have reached millions of people. HSI is also advocating for international protections for mako sharks at the 18th meeting of the Conference of the Parties of the Convention on International Trade in Endangered Species (CITES) and is collecting signatures from supporters urging international leaders to adopt these protections.

Stateside, the HSUS has worked to get shark fin trade bans passed in 13 states, including Hawaii and Texas, and three U.S. territories; and more states are considering bans.

Our work, and the work of advocates like Rob Stewart, has led to a sea change in how the world views sharks. In addition to the legislative successes and steps forward, several dozen hotel chains, airlines and global shipping companies no longer serve or transport shark fins as a result of relentless advocacy by animal protection organizations like ours.

The global momentum to protect sharks is growing and our country needs to be part of it. Sharks are too precious to lose—they are top predators in the oceans and play a critical role in the balance of marine ecosystems. As you watch these magnificent creatures on your television screens this week, we hope you will take the time to also make a call to your senators and your representative to ask them to cosponsor the Shark Fin Sales Elimination Act. Sharks deserve our protection now more than ever.