Horseracing Integrity Act will crack down on drugging, protect racehorses

In recent years, major professional sports have taken crucial steps to rid themselves of illegal doping in order to create a more level playing field and to protect athletes from the adverse effects of performance-enhancing drugs. But there has been no such respite for equine athletes in the horse racing industry, where both legal and illegal drugs continue to be used widely. 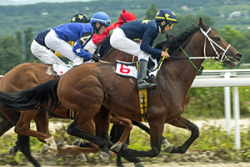 Today, U.S. Reps. Paul Tonko, D-N.Y., and Andy Barr, R-Ky., reintroduced the Horseracing Integrity Act, H.R.1754, a federal bill that will better protect America’s racehorses by replacing outdated state-by-state drug and medication rules with one national standard, ban race-day medication and increase out-of-competition testing. The bill has the support of a number of racing industry leaders and animal welfare groups, including the Humane Society Legislative Fund, the Humane Society of the United States, The Jockey Club, and the New York Racing Association. The HSUS testified before the House Energy and Commerce Subcommittee on Digital Commerce and Consumer Protection in support of this bill when it was introduced in the last Congress.

It is no secret that we have a drug crisis in the horse racing industry, one that has led to the premature deaths of thousands of horses over the years. The problem began when Congress, in 1980, decided to leave it up to states to come up with their own rules on what drugs to allow in horse racing. This has led to a confusing patchwork of state laws with no uniform national standard, and it’s been a boon for unethical trainers who can move from state to state to avoid penalties while continuing to dope racehorses.

The widespread use of both legal and illegal drugs can lead to a multitude of problems, both for the equine athletes and for their riders. Some drugs allow a horse to push through pain, intensifying an injury, or force worn-out horses to compete, which can result in career-ending injuries and even death. Overuse and abuse of drugs administered too close to a race can also mask lameness in horses during pre-race exams—a problem veterinarians and other racing officials have expressed concerns about—endangering both the horse and the rider during a race.

Too many American racehorses are currently also administered race-day drugs to enhance their performance, a practice banned by nearly all other countries. If a horse needs drugs in order to race, that horse should not be on the track.

Support for reform is quickly growing throughout the racing industry as stakeholders recognize the importance and need for clean competition in horse racing. The operators of Belmont Park, Saratoga Race Course, Aqueduct Racetrack, and the Stronach Group which owns several tracks, including Pimlico Race Course, which is home to the Preakness and Keeneland, all support the Horseracing Integrity Act, as does the Water Hay Oats Alliance and members of the Coalition for Horse Racing Integrity.

This bill is a gamechanger for equine athletes. It is a pro-animal, pro-industry measure that will not only help restore fairness to the sport but it will also protect racehorses from the winning-at-all-costs mentality embraced by cheaters. When the bill was introduced in the last Congress it had 132 cosponsors, and we are working to ensure it will cross the finish line this time. Please contact your U.S. representative and urge them to cosponsor the Horseracing Integrity Act, H.R.1754.

The U.S. is allowing trophy hunters to bring home hundreds of leopard trophies…

The protection of wildlife is not about killing; it’s about cooperation that…