A new poll shows that more than 75% of Americans oppose trophy hunting, and 82% oppose the trophy hunting and import of African lions and elephants, both listed as threatened under the Endangered Species Act. Notwithstanding this evidence of public opposition to trophy hunting, a stubborn minority is meeting at the Safari Club International’s convention in Las Vegas, Nevada, to congratulate each other on last year’s kills and shop or bid for their next pay-to-slay adventure—a profligate betrayal of threatened and endangered species, especially in light of the global biodiversity crisis.

The rate of species extinctions is accelerating, according to recent findings from the United Nations’ Intergovernmental Science-Policy Platform on Biodiversity and Ecosystem Services, with around one million different animal and plant species considered to be directly threatened with extinction—more than ever before in human history. The second largest contributor to this crisis is identified as direct exploitation of organisms, such as poorly managed trophy hunting. And unfortunately, American trophy hunters continue to be the most prolific contributors to the trophy hunting industry in the world. 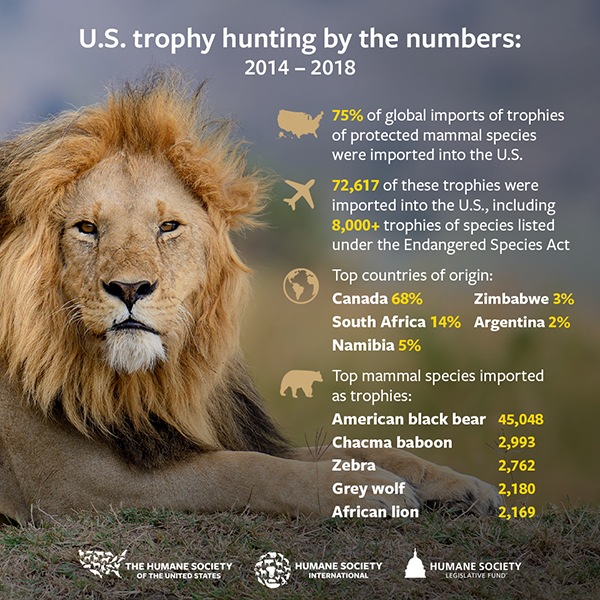 With the deaths of Cecil, Mopane and other internationally beloved lions motivating us, we are fighting on multiple fronts to end America’s role in the demise of threatened and endangered species by trophy hunters. The Humane Society Legislative Fund is working to secure House language in the federal government’s annual funding bills to prevent the U.S. Fish and Wildlife Service from issuing import permits for African lion and elephant trophies from Tanzania, Zambia and Zimbabwe. We’re also working closely with members of Congress to reintroduce the Prohibiting Threatened and Endangered Creature Trophies Act (known as the ProTECT Act), a bipartisan bill that would prohibit the import of trophies of any species listed as threatened or endangered under the Endangered Species Act.

And on the other side of this fight, Safari Club International and the trophy hunting industry is in Las Vegas, wining and dining elite patrons, patting each other on the back for the most animals killed, the most hunting milestones reached and the successful slaughter of all of the “African Big Five” (a lion, elephant, rhino, leopard and Cape buffalo). While COVID-19 safety concerns made it impossible to send observers this year, our investigation at the Safari Club International 2020 convention uncovered sales of illegal wildlife products and hunting trips that totaled hundreds of thousands of dollars—money that stays almost entirely in the pockets of the hunting outfitters. Safari Club International itself earned $6,564,072 from its 2020 convention, mostly from sales of hunts and other items donated to the Club and auctioned off at the convention; the convention is the Club’s biggest money-maker.

We’re waging a global campaign to expose and eliminate this exploitative industry forever, but it’s a big fight and we need your help. Please sign the pledge to end trophy hunting, ask the U.S. Fish and Wildlife Service to stop issuing trophy import permits and urge Congressmembers to support the reintroduction and passage of the ProTECT Act this year.

The U.S. Trophy Hunting by the Numbers full report will be released later in 2022.

Kitty Block is CEO of the Humane Society of the United States.

Our Taking Action for Animals conference returns to inform and inspire…

The time for Congress to act on horse soring, horse slaughter bills is now