For animal advocates, the passing of Senator Robert Dole is an occasion not just for remembrance but for plain and pure gratitude. He was one of us, and he put his name, his word and his imprint on some of the most important animal protection measures of the last fifty years. We’re going to miss him.

The humane movement has many friends in the U.S. Congress these days. But there was a time, not so long ago, when our champions were few in number. That’s one thing that made Senator Dole special. From the time of his service on the House Agriculture committee when the Animal Welfare Act passed in 1966, throughout his years in the House and Senate, and even after his return to private life, he was always there for us—and for animals. He was there for us when the cause was much less popular, and he was there for us when the challenges were great.

Dole sponsored and supported many animal protection measures over the years, but his signature achievements were the passage of the Humane Slaughter Act amendments of 1978 and the Animal Welfare Act amendments of 1985. From the vantage point of history, there is little doubt that his commitment and sincerity were not just essential but decisive to their passage. He was a confident, assertive and ready champion of these two measures, both of which faced strong opposition in the Congress during the years he worked toward their passage. 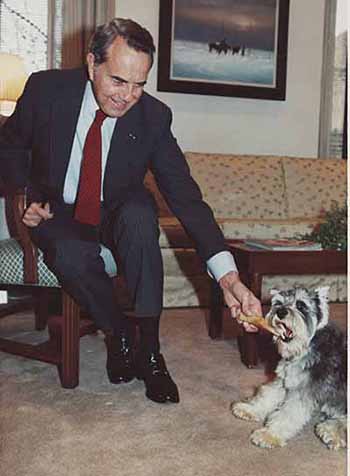 The 1978 legislation amended the original HSA to require the proper treatment and humane handling of all livestock (including those imported from abroad) slaughtered in USDA-inspected slaughter plants. For its first twenty years, the law had applied only to animals slaughtered for sale to the federal government, and it was a remarkable moment when Dole, representing his home state of Kansas, with its substantial beef industry sector, made a simple and self-assured statement about the measure. "It seems to me," he told his colleagues, “there isn't much doubt about the legislation. This is legislation whose time has come."

In the 1980s, with pressure for stronger laws to improve the lot of animals in research, Dole emerged as the champion of a comprehensive reform package mandating higher standards at research facilities, procedures to address and minimize animal pain, oversight committees at research institutions, an information center at the National Agricultural Library to facilitate literature searches for alternatives to animal use, and special attention to the psychological well-being of animals and exercise for dogs, among other requirements. In making the case for the package, Dole was again characteristically succinct. "Laboratory animals deserve humane treatment."

With his wife Elizabeth, who represented North Carolina in the U.S. Senate from 2003-2009, Senator Dole shared a deep love for animals. Both were prominent supporters of companion animal measures in the Senate, and their dog Leader was a great presence during the 1996 presidential campaign, even participating in a mock election against Bill Clinton’s cat Socks. They were generous supporters of animal protection organizations at the local and national level, too. Senator Dole continued to advocate for important reforms, for example, teaming up on a bipartisan basis with former Senator Bob Kerrey in an ad in Politico and The Hill pressing for action on a raft of key bills.

To Senator Elizabeth Dole and the rest of Senator Dole’s family, we express our deepest sympathies and regret. The flags are at half-staff at the Capitol in his memory right now, and properly so, for Bob Dole was a statesman for the ages, a decorated veteran who recovered after suffering grave wounds on a World War II battlefield, an elected official for 35 years who received resounding bipartisan praise on the occasion of his leaving the Senate, a man of heart who looked out for veterans and individuals with disabilities, and a three-time presidential candidate who in retirement continued to serve the nation as an unofficial advisor to presidents of both parties. We’ll remember him for those things, but we’ll remember him most for his mercy and kind regard toward animals whose interests, he always believed, should unite us all.

Our Taking Action for Animals conference returns to inform and inspire…

The time for Congress to act on horse soring, horse slaughter bills is now