In August, reports began to surface that a lion in Zimbabwe, who was beloved by local communities, was likely lured out of Hwange National Park and allegedly killed by an American trophy hunter. His name was Mopane.

For anyone who followed the story of Cecil the lion in 2015, these details created a sense of déjà vu and the sad feeling that not much has changed to protect these targeted animals since the worldwide outcry for justice for Cecil. For the locals who had loved Mopane enough to start a petition to protect them, it must have felt like a horrible defeat. And for the lions of Mopane’s pride, famous for its distinctive coalition originally formed with another male lion named Sidhule (himself killed by a trophy hunter in 2019) and which included two adult females and six sub-adults of about 16 to 18 months old, the delicate balance of their family was disrupted. Mopane was a father and played a significant role in his pride. Without him, his pride is now vulnerable to takeover by another male or group of males, which may lead to the killing of the cubs and females. Every time a trophy hunter kills a lion, the effects reverberate through realms both human and animal, and that’s what happened when Mopane’s last breath left him.

Mopane’s death is a heart-wrenching reminder that other lions in the Hwange National Park area may be sitting targets for trophy hunters. Such lions include Humba and Netsai, two brothers who took over Cecil’s pride in 2018 and are a source of pride to local photographic tour operators who relish showcasing these two beautifully maned lions to wildlife viewing tourists. Humba and Netsai have been called “the heirs of Cecil” because their now 25-member pride consists of Cecil’s mates, daughters and grand cubs. If Humba and Netsai are targeted by trophy hunters, Cecil’s relatives will be vulnerable to takeover and in danger of being killed.

At the Humane Society family of organizations, we believe, to put it simply, that enough is enough. Just recently, the Humane Society of the United States, Humane Society International and the Humane Society Legislative Fund wrote to the U.S. Fish and Wildlife Service to call out the agency for using faulty information to justify its issuance of lion trophy imports from Zimbabwe and failing to fulfill its mandate under the Endangered Species Act. The letter was prompted by Mopane’s killing and the concern that lions who reside around Hwange National Park, such as Cecil’s pride, may be next targets of trophy hunting.

Our letter is the latest in a series of actions and campaigns that our family of organizations has taken in recent years to garner increased protection for the African lion. In 2015, in response to our petition, the U.S. Fish and Wildlife Service listed the African lion under the Endangered Species Act. In 2017, the HSUS, HSI and HSLF wrote to the agency to protest that it did not use the best available science when reviewing permit applications to import lion trophies from Zimbabwe. Our letters in 2017 and last week provided the FWS with new scientific research showing that trophy hunting of lions in Zimbabwe has been poorly managed and that lion hunting quotas are not science-based. While trophy hunting proponents claim that revenues from such hunts are an important source for the local livelihoods and increase the local community’s tolerance toward living with wildlife, the numerous studies we’ve provided show that there is little evidence that trophy hunting in Zimbabwe delivered these benefits.

Our plea has fallen on deaf ears. We pointed out in the 2017 letter that fewer than 300 truly wild adult male lions remain in Zimbabwe. Yet, since 2018 the agency has issued 23 permits to import lion trophies from Zimbabwe.

It is our conviction that the slaughter of Cecil in 2015 was not an anomaly but a peek into the perverse hobby of killing majestic wild animals and the enabling of this by government agencies who make decisions on trophy import permits. We are particularly concerned about the continuing trophy hunting of male lions in the Hwange National Park area. Much research shows that human-caused removals of lions in the Hwange area has caused lion populations in the area to decline and is therefore not sustainable. 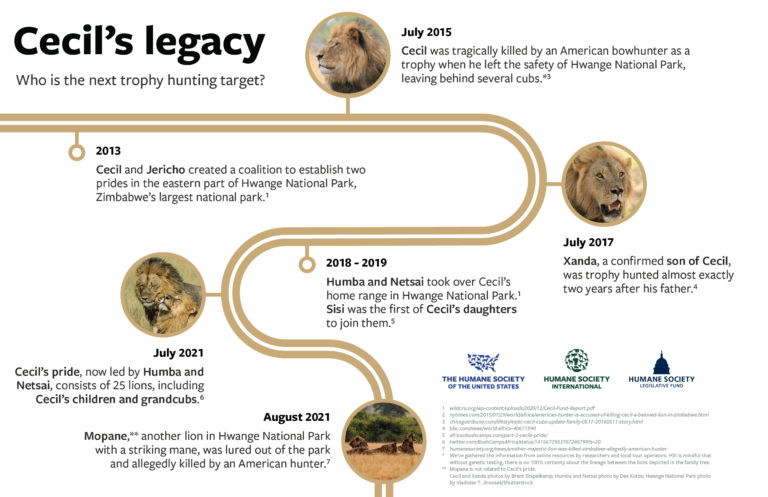 Our plea to the FWS to scrutinize the import of lion trophies is echoed by Zimbabwean advocates. On September 21, Advocates4Earth, a Zimbabwe-registered non-profit, asked the FWS to suspend the import of lion trophies from Zimbabwe. The group called out the trophy hunting of lions as unsustainable, unethical and lacking transparency. Advocates4Earth also informed the FWS that, in its legal opinion, the Zimbabwean government, in allowing the trophy hunting of lions, violates the environmental rights of Zimbabwean citizens enshrined in the country’s constitution and potentially violates the spirit of Zimbabwe’s Parks and Wildlife Act.

The #SaveOurLions campaign by young environmental leaders at Advocates4Earth shows that protecting imperiled wildlife is a shared global value. It also shatters the fallacy that African communities are in favor of allowing foreign hunters into their countries to slaughter their wild animals.

Mopane’s recent killing and the fact that Cecil’s family and other lions in his pride are potential targets to trophy hunters should be a wakeup call for the public and for governments across the world. We know how the story ends if we don’t do everything we can to protect them.

Join us in urging the U.S. Fish and Wildlife Service and governments of other trophy destination countries to stop the import of lion trophies.