Every year, the U.S. Department of Agriculture releases a report on mink fur production, and this year’s report shows a promising outlook for mink, a species that suffers immeasurably for nothing but trim on a jacket, a pom on a hat or purse or eyelash extensions.

The number of mink killed last year for their fur dropped 49% to 1.4 million, the lowest number on record according to USDA reports going back to 1975. This means that more than a million mink were spared from having to endure an unnatural life in a filthy cage and a death in a gas chamber. It’s also a sign that our campaigns against fur in the fashion industry and consumer markets are succeeding in making the point. No animal should suffer so much for something so frivolous.

Previous lows in the annual mink production statistics hovered around 2.5 million mink in the early 2000’s before the numbers peaked in 2014 and 2015 at 3.7 million mink.

Another good indicator of our success is that the overall value of the U.S. mink trade dropped to $47 million, a 19% decline from 2019, the lowest on record.

While the pandemic has had a significant impact on the global fur trade, this downward spiral started well before 2020. 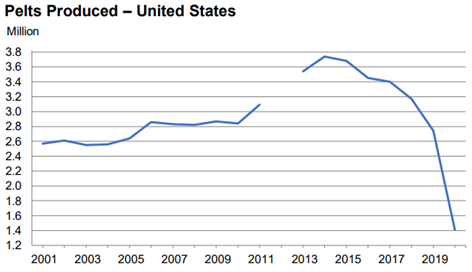 The pandemic revealed one more reason why mink farming must come to an end. Mink are especially susceptible to SARS-CoV-2, the virus that causes COVID-19, and the virus can jump back and forth between mink and humans, as well as from farmed mink to wild populations. Mink fur farms can incubate dangerous mutations that could potentially undermine the efficacy of vaccines. Outbreaks have occurred on more than 430 mink fur farms in the US, Canada and the EU, and that number continues to rise. More than 20 million mink were killed in response to the outbreaks, and several countries have suspended or completely ended mink fur production. Estonia became the latest country to ban fur farming just last month.

While this sharp decline in production has led to a temporary increase in pelt prices, we expect that to be short-lived. Since the end of March, we’ve seen fur-free announcements from some of the biggest names in fashion. Saks Fifth Avenue, Valentino, Neiman Marcus, Canada Goose, Alexander McQueen, Balenciaga, Holt Renfrew, Moose Knuckles and Mackage have all proudly announced the end of fur. We haven’t seen this sort of momentum since Gucci, Michael Kors, Yoox Net-a-Porter, Jimmy Choo and Burlington Coat Factory announced fur-free policies in 2017. That inspired a new wave of fur-free announcements the following year from brands like Chanel, Versace, Coach, Burberry and so many others. The companies that continue to sell fur are becoming scarcer and scarcer.

But we won’t stop our work against fur production until using fur in fashion is a relic of the past. 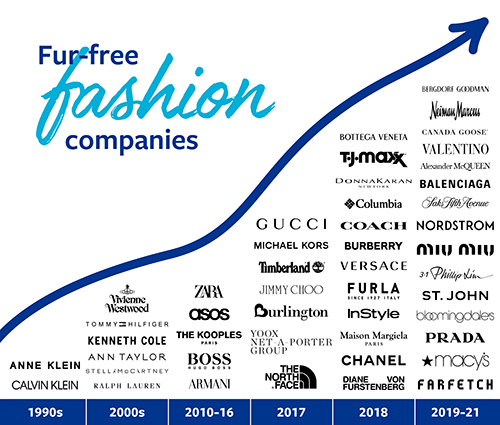 We’re dedicated to working with local advocates to secure fur sales ban in cities, counties and states across the country. In May, Weston, Massachusetts became the second city in the Bay State to ban fur sales following a similar ban in Wellesley last year, and the Massachusetts legislature is considering a statewide ban, as well. When West Hollywood banned fur sales in 2011, it led to a fur-free Berkeley, San Francisco, Los Angeles and eventually a fur-free California.

Just last month, Israel became the first country to ban fur sales, and we’re involved with a push for a Fur Free Britain. Our Humane Society International UK team is leading that charge and has welcomed the UK government's recent call for evidence to consider the case for a fur sales ban, a proposal that has strong support with 72% of Brits in favor of ending fur sales. We’ve partnered with Stella McCartney to see the end of the fur trade in the UK and around the globe. 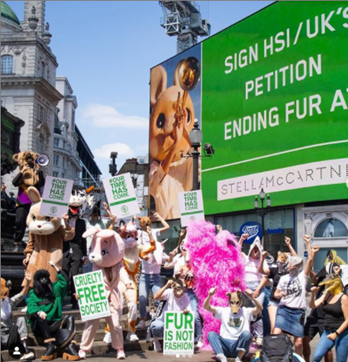 There’s a very real chance we could see an end to the fur trade in the Western world in the coming decade, and substantial progress against it in other nations. The fur trade is down, but it is not out, and the biggest fights are yet to come. That’s why we need YOU to share every fur victory on social media, sign every fur petition (including HSUS's petition to G20 leaders), take every moment to thank companies that have gone fur-free and ask the ones that haven’t to join the right side of history and call your city council and state representatives to let them know that you support a ban on fur sales.

Together, we can—and will—win this one for the millions of foxes, mink, rabbits, raccoon dogs, chinchillas and coyotes who are confined and killed every year for their fur.

House takes a bite out of live wildlife markets, wildlife trade with amendments…

Wolves in the Northern Rockies move closer to getting protections they…