The U.S. House has just approved additional help for animals, including right whales, chimpanzees and farm animals, as it continues the process of appropriating funds for federal agencies and departments for FY2021.

The provisions that passed the full floor today by a vote of 217 to 197 are included in the House’s second minibus, a package of appropriations bills, and they build on wins we helped secure in the first such package that passed last week for wildlife, companion animals and wild horses and burros. The minibus approved today funds departments including Commerce, Health and Human Services, Transportation and the U.S. Postal Service.

Following are some of the reforms in this package addressing key animal welfare issues:

More funding for research on North Atlantic right whales: These critically endangered animals are just a step away from extinction, with fewer than 400 individual whales left in the seas off the U.S. and Canadian coast. House members approved an amendment that would provide an additional $1.5 million to the Department of Commerce (on top of the $5 million already in the base bill) for research and monitoring of these whales to help reduce entanglements and vessel collisions, both among the chief causes of mortality. Reps. Seth Moulton, D-Mass., Jared Golden, D-Maine, Bill Posey, R-Fla., and John Rutherford, R-Fla., offered this amendment.

Retiring chimpanzees to sanctuaries: The committee report accompanying the appropriations bill funding the Department of Health and Human Services directs the National Institutes of Health to promptly transfer approximately 40 retired chimpanzees now languishing at the barren Alamogordo Primate Facility in New Mexico, as well as chimpanzees at two other research centers, to retirement at Chimp Haven, a federal sanctuary based in Louisiana.  Rep. Lucille Roybal-Allard, D-Calif., successfully prevailed on the appropriations committee to include this humane and cost-effective provision.

Continuing a crucial funding source for wildlife conservation efforts: To date, sales of the Save Vanishing Species first class stamp have raised more than $5.9 million for the conservation of some of the world's most imperiled species, such as elephants, tigers and sea turtles, and supported 99 conservation projects in 35 countries, at no cost to U.S. taxpayers. Although 50 million more of these stamps remain in stock, they will no longer be sold past 2020 unless Congress approves an extension. The House already passed H.R. 1446 (introduced by Reps. William Lacy Clay, D-Mo., and Jeff Fortenberry, R-Neb.) to authorize the USPS to continue selling these stamps, but the Senate has not acted on it or the companion bill, S. 652 (introduced by Sens. Rob Portman, R-Ohio, and Tom Udall, D-N.M.), so the minibus provides an alternate path to fix the problem. Appropriations subcommittee chairman Mike Quigley, D-Ill., championed inclusion of this language to permanently extend sales of the stamp for as long as copies remain, with support from Rep. José Serrano, D-N.Y.

In other good news, the House Rules Committee, under the leadership of Chairman Jim McGovern, D-Mass., prevented floor consideration of a harmful amendment that would have worsened transport conditions for farm animals. The amendment, filed by Reps. Roger Marshall, R-Kan., Greg Gianforte, R-Mont., and Collin Peterson, D-Minn., would have imposed a one-year delay on the implementation of a Department of Transportation rule to ensure that livestock haulers take adequate sleep breaks. Truck driver fatigue and resulting crashes are a major public health and safety problem, and this amendment would have drastically expanded already excessively long driving shifts and increased the risk of crashes. Longer trips without rest periods could also increase disease risk because there’s evidence that animals packed closely together under such difficult conditions can easily get and spread pathogens like influenza and salmonella.

We are excited about these wins. Along with the reforms announced last week, they help ensure that our country continues to make progress on key animal welfare issues that the Humane Society of the United States and Humane Society Legislative Fund have been fighting for over a long time. We now urge the Senate to quickly take up, and approve, these crucial reforms. As the appropriations process continues in coming months, we’ll keep you informed on these issues and more. 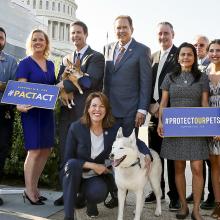 How we work to save animals (part 2): Yes, there should be a law